Quote of the Day – “Here is a real treat. The Armageddon playoff game from the Blitz Championship held July 22, 2013. Both girls are co-champions,  equal in every way. But the trophy itself needed to be decided as to who got to take that home. This game decided that. In an Armageddon game, White had to win and got 5 minutes (no delay), Black had draw odds, meaning she could draw and still win, but had only 3 minutes. Becca had won the coin toss and chose to be Black with the 3 minutes with draw odds. What followed was incredibly exciting to watch.” Click here to watch the video. – Jeffrey Roland, Blitz Event TD 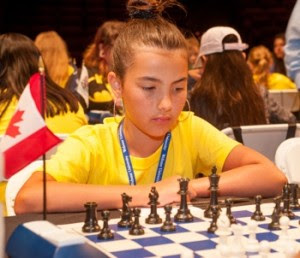 See continuous round by round coverage, with pairings and results, on Susan Polgar’s blog and the Idaho Chess Association web site. 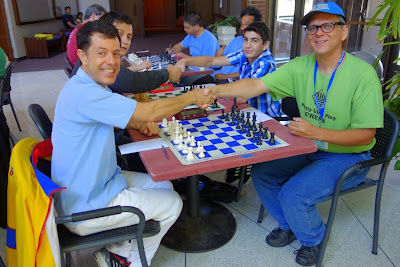 IM Guillermo Llanos of Argentina shakes hands with Idaho Chess Association President Jeffrey Roland on Board 1 of the 2013 SPFGI Friends and Family Bounty Tournament July 23, 2013 in St. Louis. The bounty is on the head of IM Llanos as anyone who beats him, or earns a draw, will win a special prize.

Click here to see more than 200 photos posted so far on Picasso from the tournament and the multiple side events and activities.